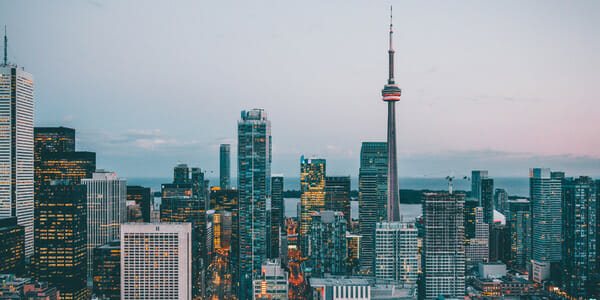 Did you know that Canada’s population growth has hit a record? 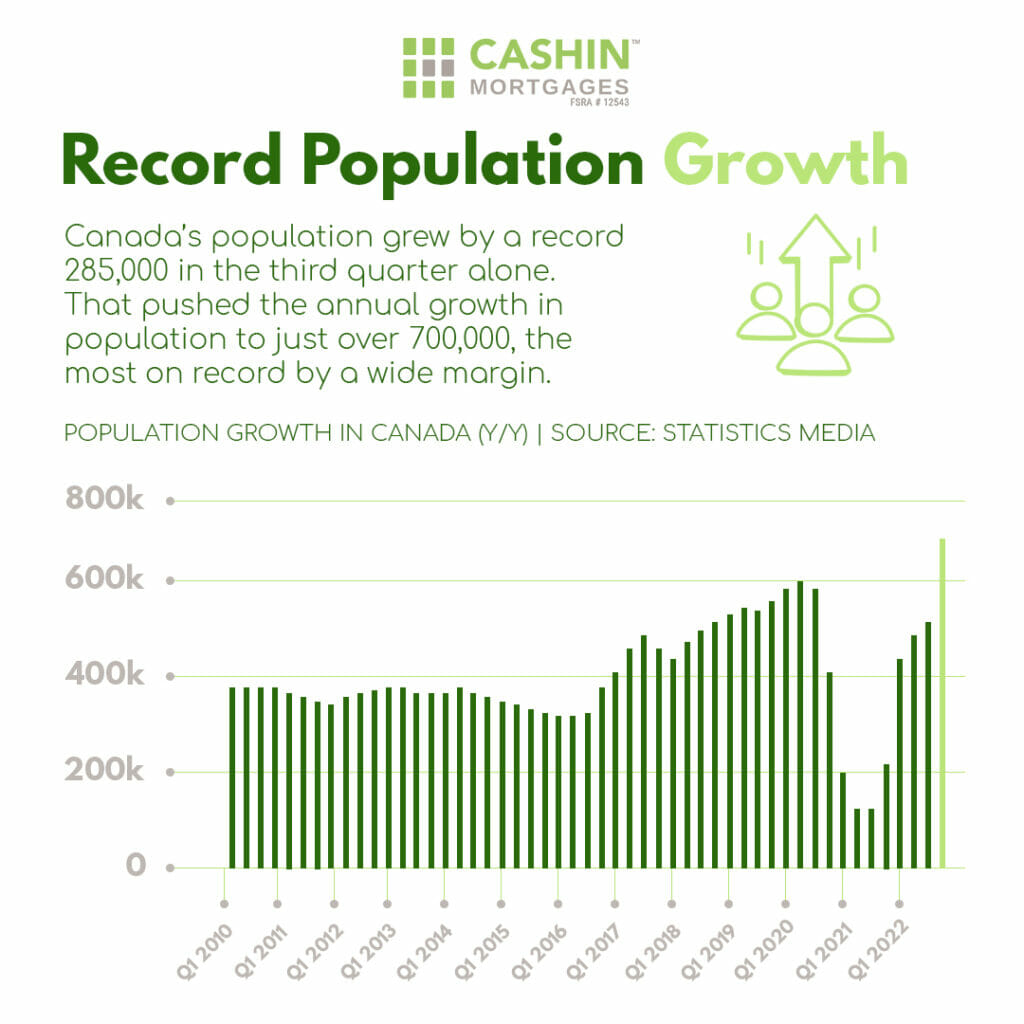 According to Statistics Canada, the country has experienced its fastest population growth rate since the baby boom’s peak, primarily due to immigration.

Early in the Covid-19 epidemic, Canada saw decreased levels of immigration. Newcomers to Canada from all over the world have not been as significant a driver of population growth in Canada since the third quarter of 2019 when international migration accounted for 175,907 new residents.

The country aims to accept a record-high number of newcomers to bolster its economy in the face of an aging natural population and a low birth rate. The 118,114 immigrants that arrived in Canada during the second quarter of 2022 were the most since comparable figures have been kept.

This population census is the country’s highest single-quarter gain since Newfoundland and Labrador (then known as just Newfoundland) joined the Confederation in 1949.

It also anticipated the large majority of the immigrant population to continue to live in a metropolitan region in 2041, with Toronto, Montréal, and Vancouver remaining the three principal areas of residency for immigrants. 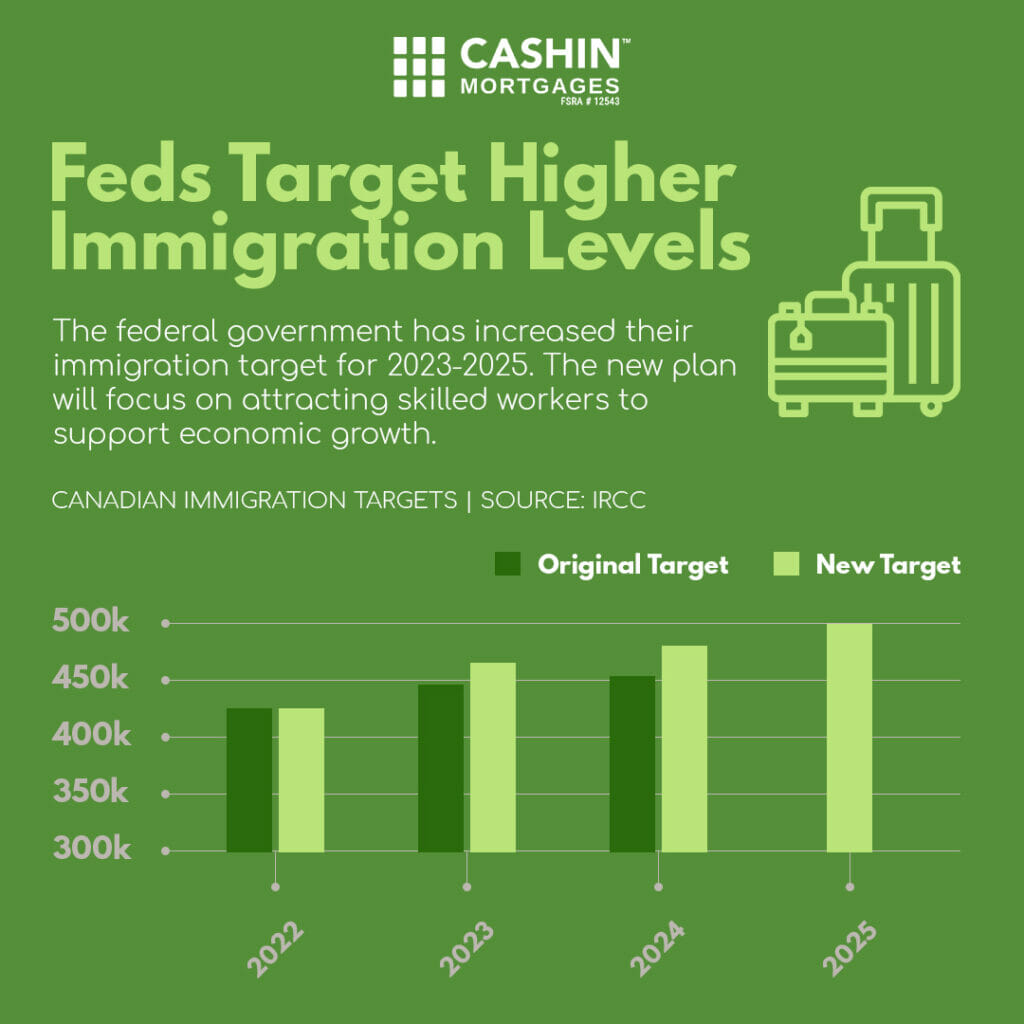 Sean Fraser, Canada’s Minister of Immigration, Refugees, and Citizenship Canada (IRCC), presented Canada’s 2022 Annual Report to Parliament on Immigration on November 1, 2022. The plan supports immigration as a strategy to help businesses recruit workers and attract the skills needed in important sectors like health care, skilled trades, manufacturing, and technology to address the social and economic issues that Canada will confront in the next decades.

The Canadian economy is currently experiencing major labor market shortages, which is creating uncertainty for Canadian businesses and workers. According to newly released census data in Canada, a large population is approaching retirement age. Currently, one in every seven Canadians is between the ages of 55 and 64. The number of job openings in Canada has now hit an all-time high of one million, and businesses are suffering financial losses as a result of the labor crisis. To solve the labor shortfall in Canada, the country intends to increase its immigration targets.

In 2021, the country welcomed the greatest number of immigrants in a single year, with visas granted to almost 4,05,000 persons.

The country wants more than 60% of total admissions to be economic migrants by 2025, according to the ministry. 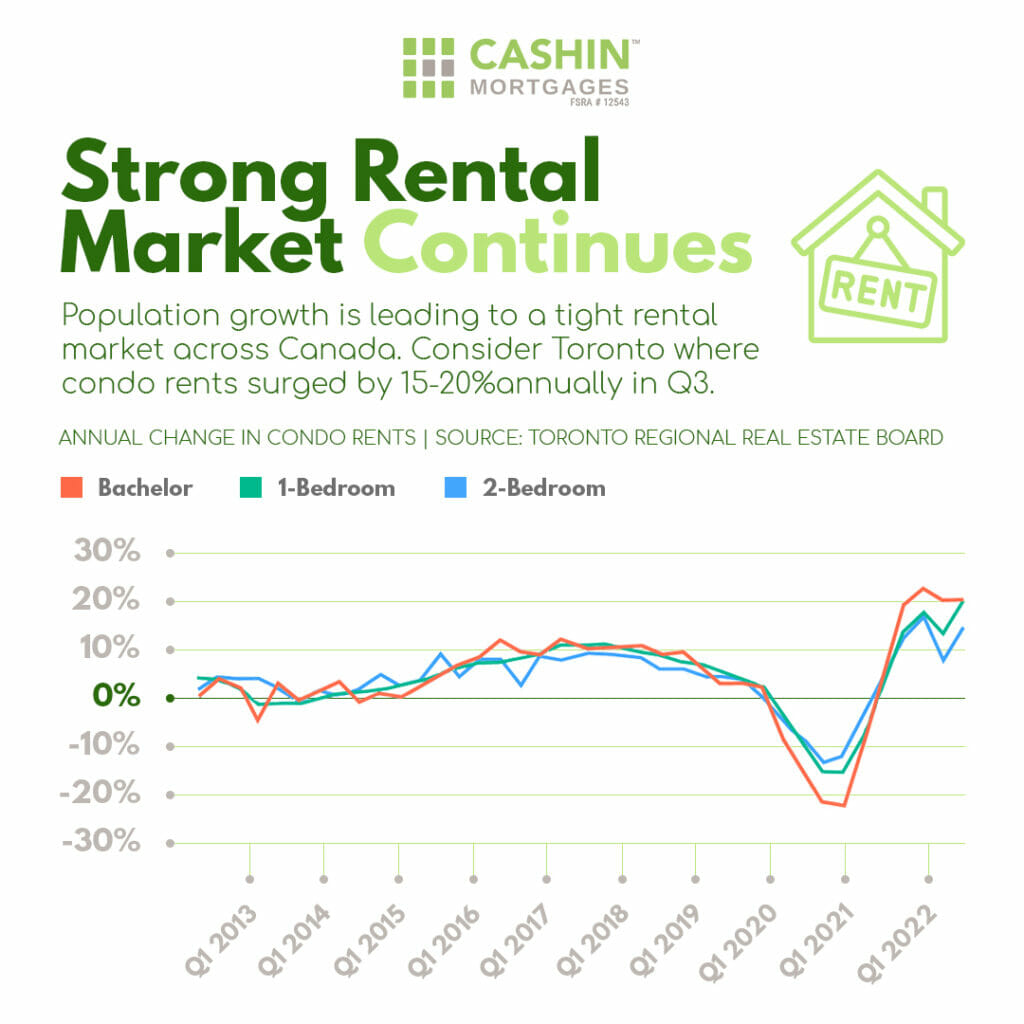 TRREB attributed the price hike to prospective first-time homebuyers delaying purchases owing to rising interest rates. With a high demand for condo rentals and a limited supply, competition has heated up, driving up rental prices.

The central bank boosted its main rate to 3.75% for the sixth time. As a result, there is strong demand and fierce competition in the rental market. Higher borrowing rates prevent more people from buying homes, increasing competition for available rental units.

Total housing starts will decrease in 2023 due to fewer preconstruction sales, according to CMHC’s spring 2022 housing market projection. The City of Toronto’s proposals to boost residential construction costs by 46% by 2024 adds to the difficulties.

In its most recent interest rate announcement, the Bank of Canada underlined that rates will need to climb further attributed to inflationary pressures. 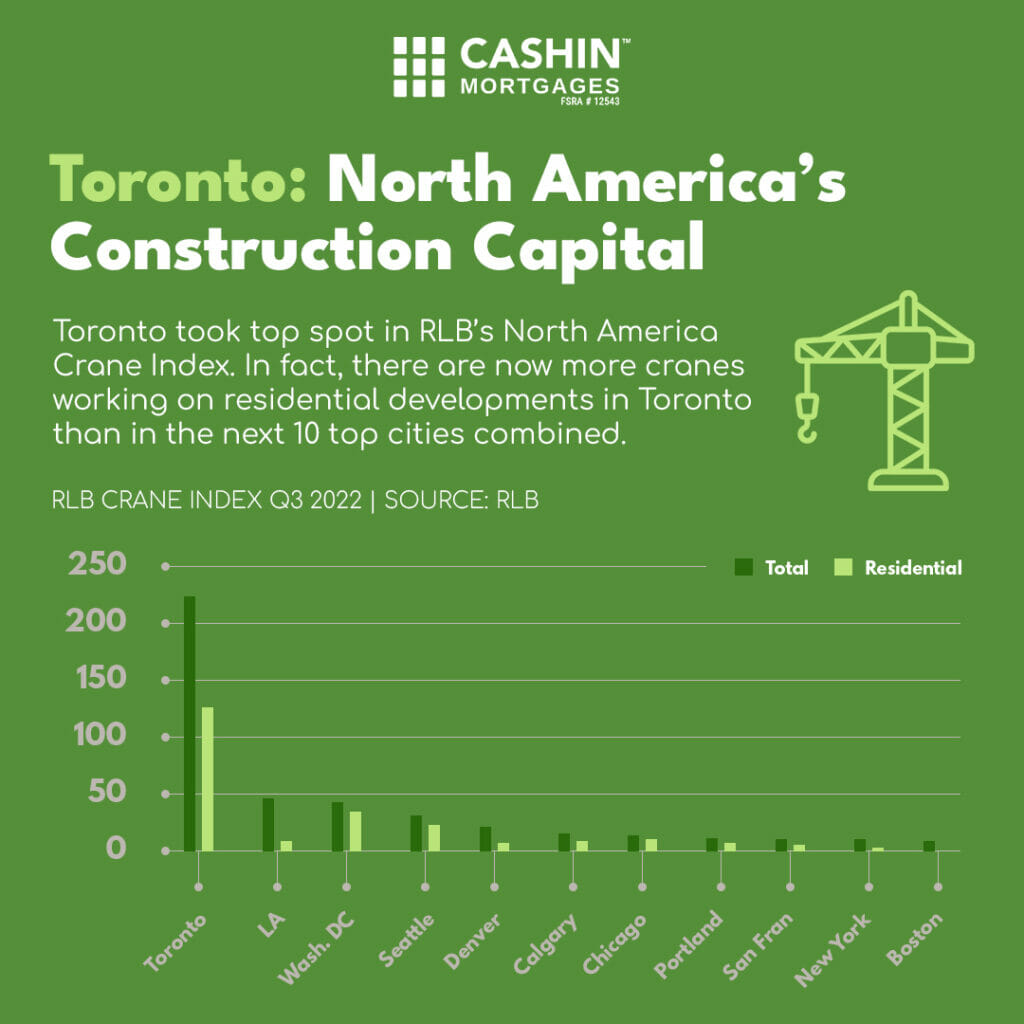 The housing bubble in Toronto resulted in a building boom. Even though Toronto had 230 construction cranes deployed in Q3 2022, a 9% decrease from the previous quarter, nothing compares to the city’s construction boom in North America.

The majority of cranes in Toronto are utilized for high-rise construction projects. RLB found 130 residential cranes in the city, indicating that more than half of them are residential. In the short term, soft pre-sale demand may hinder this.

Seattle (36), Denver (23), and Chicago (14) had the next highest number of residential cranes. The magnitude of the building in Toronto is similar to Dubai’s 2006 surge.

According to the most recent edition of the Canada Mortgage and Housing Corporation’s Housing Supply Report, Toronto had the highest number of housing starts in the first half of 2022. This was a 7% increase to 19,520.  While apartment and row house construction grew in Toronto, construction of less low-cost housing types (single-detached and semi-detached houses) fell.

Inflation is now starting to cool 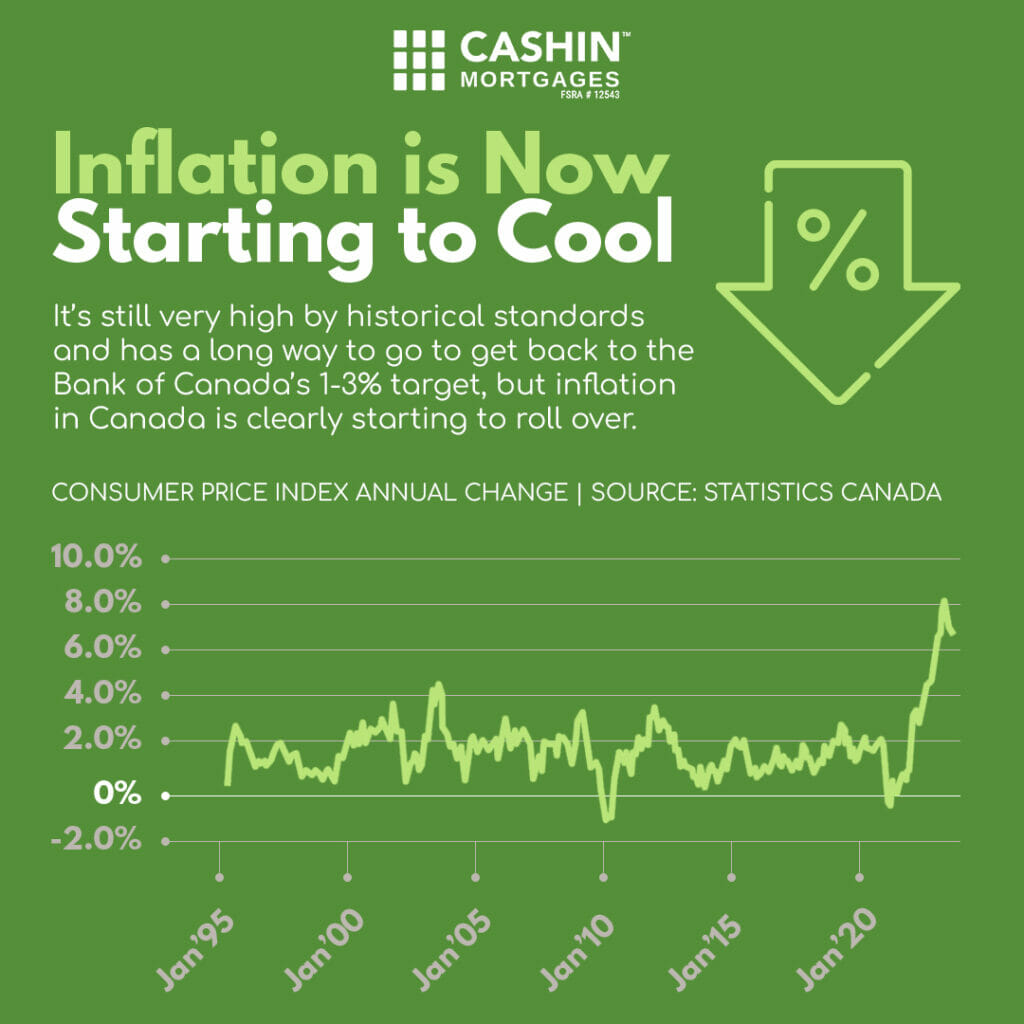 Inflation is starting to ease after rapidly climbing during the first half of 2022, hitting 8% this summer.

Canada’s reported inflation rate has dropped from 8.1% to 6.9%, but food prices continue to rise and underlying pricing pressures remain stubborn.

To push inflation back to its 2% objective, the Bank of Canada (BoC) has raised interest rates by 350 basis points in just seven months, one of its most aggressive tightening efforts ever. The Fed has indicated that it is nearing the end of one of the fastest rate hiking cycles in its history.

The rate increases are in response to inflation hitting its highest point in nearly four decades. In September, inflation was 6.9 percent, significantly above the central bank’s target of two percent. Since peaking at 8.1 percent in June, it has been progressively dropping.